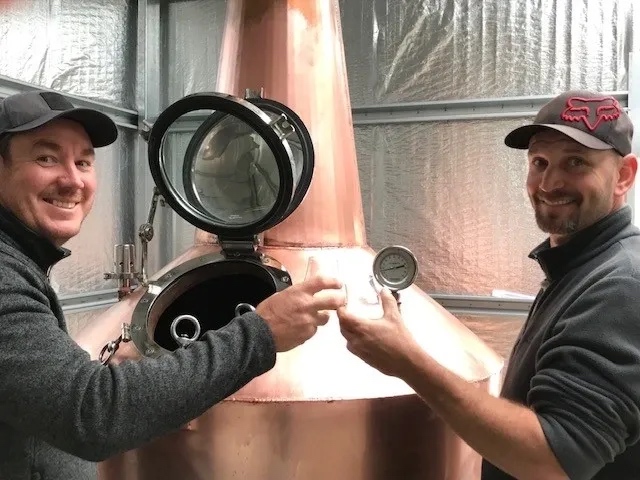 After the success of our social media vote, our Still has officially been named Earl. Corey and Steve held a little ‘naming’ ceremony at the weekend and sprinkled Earl with some of our favourite Tasmanian Whisky, whilst also enjoying a tipple, to make it official.

Big Earl was put to work last week and produced us some top notch New Make which went into barrels yesterday. The barrels we had were re-coopered last week; the Cooper was so keen on the barrels he asked if we had any for sale or if we knew where to get more! The barrels are ex-Tasmanian Fortified wine barrels from a local wine maker and we’re extremely excited to see the fininshed product in two years’ time.

Meanwhile, Earl got a much needed polish after a few hards days labour and the gents enjoyed some much needed rest after 20 hours straight of distilling. We’re still refining the process and our little condensor is going to be upgraded in the coming weeks. Currently Big Earl has only been allowed to operate at 50% so we’re hoping with the modifications to the condensor we’ll be able to pump Earl up full steam. Thanks to everybody who voted on the Still name, we’re stoked to have Big Earl named.

Small batch Tasmanian premium spirits carefully crafted at every stage, by prioritising quality over quantity and even barrelling our product ourselves, our homegrown spirits are purely Tasmanian.